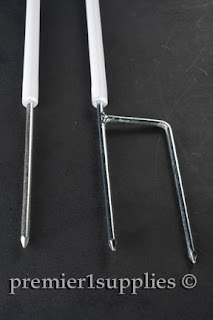 Which one to use, and when:

Single spike is best used when netting is moved frequently or in dry/hard soils.

Double spike nets are best when the netting is not to be frequently moved, the ground is soft or the installer prefers a step-in post.

What is our experience with SS or DS? Many of the nets that we use on the farms are single spike nets. We frequently move netting (unless it is PermaNet) and have dry soils in the summer. So single spike nets are more practical for our fencing needs.

My main experience with double spike occurred a summer ago while fencing a cattle pasture. I was attempting to install some double-spike netting shortly after a week of 100° heat and no rain for the last month. The ground was hard and dry and the posts refused to go into the ground. Frustrated, I went for my hammer and began to pound directly on the cross piece of the stake. The ground continued to resist. By the time I “finished”, the stakes were less than 3" into the ground and bent beyond usefulness (the stakes are meant to be stepped-in, not hit with a hammer). The proper move would have been to use either single spike posts or drill pilot holes for each stake.

However, in the Spring when the ground is moist, I prefer to use double spikes for a semi-permanent poultry enclosure. The spikes provide added stability and step into the ground easily. Functionality depends on the specific fencing situation.

What do our customers prefer to use? Right now 2/3 of the ElectroNet that goes out our door is single spiked. However, double spike netting is becoming more and more popular and the gap between the two is shrinking. 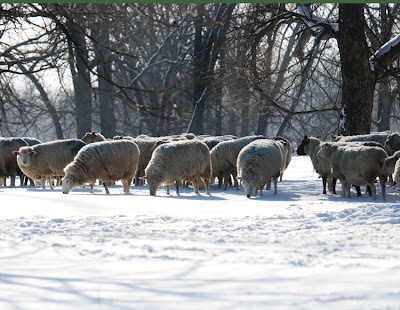 It’s December which means winter—in theory—will be here soon. Currently it is 66° in Washington, IA but that could change to 10° in an instant (after all, it is Iowa weather). Here are a few tips for dealing with the highly anticipated cold weather.