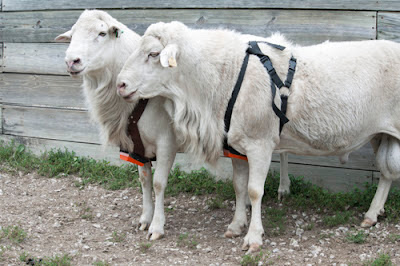 (photo) Two Katahdin rams demonstrating a Cross Your Heart Harness (left ram) and a Nylon Harness (right ram). These rams were put in with the ewes on Sept. 1.

Though this year’s lamb crop is still in the drylot, that doesn't mean Premier isn’t thinking about next year’s lambs. A few rams have been in with a select group of ewes since September 1st. We expect the ewes to start lambing around January 8th. 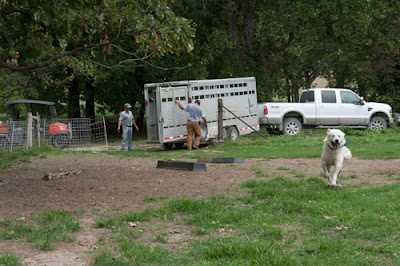 (photo) Moments before the rams are let out, Chloe the guard dog runs off to inform the ewes that the “boys are back in town.”

We are starting the breeding season in September instead of November because we have access to more indoor lambing space than in years past. We cleaned out a warehouse which had formally been a lambing barn. With the lambing barn returned back to its original purpose, we are now able to lamb more ewes indoors. This provides us with more space for lambing jugs, which we are more than happy to take advantage. 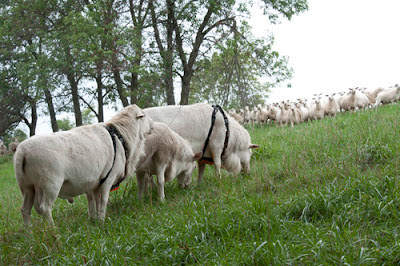 (photo) The rams eventually made up to the hill where the ewes were eagerly awaiting.

The breeding season doesn't exactly start as soon as the rams walk into the pasture with the ewes. During the summer, we brought in several rams to use this breeding season. They will add fresh genetics to our hair flock. We also need to make sure that our other rams are in top condition before heading out to the pasture. Once in a ewe filled pasture, rams tend to think about things other than eating and maintaining condition. 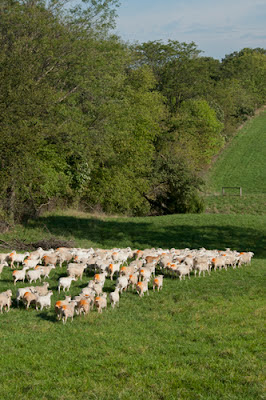 (photo) A few days after turning the rams out with the ewes. The orange marks are from the marking harnesses and crayons, an efficient way to determine which ewes have been bred and which have not.

While we're picking the rams and plumping them up, the ewes are on pasture once their lambs are weaned. Those that are on the leaner side are sorted for condition and given a weight gaining ration. Some are culled depending on age and condition. A month prior to lambing, ewes are flushed. This means they receive excellent nutrition to help their bodies be at peak fertility for breeding. This will provide us with more lambs during lambing season.

We bring the flock in once a week to check and see which ewes have been bred. We are able to determine this by using marking harnesses with crayons or raddle marker. Marks allow us to better determine when a ewe is expected to lamb. We switch the crayons each time they are brought in. A switch in color tells us which ewes were bred later and which ones were remarked.

Other happenings at Premier… 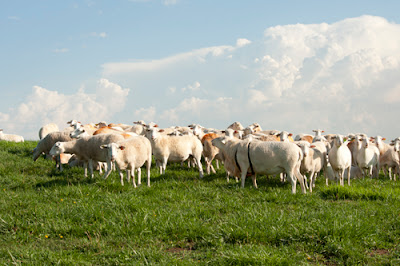 (photo) The crayon marks stayed on the ewes even after a thunderstorm (background) rolled through.

The recent rains have rejuvenated our pastures. They have changed from dead brown hues to lush greens. On our North Farm we are strip grazing a grass/clover pasture. Every few days the shepherds set up a few additional rolls of ElectroNet and graze the ewes on a fresh strip of grass. 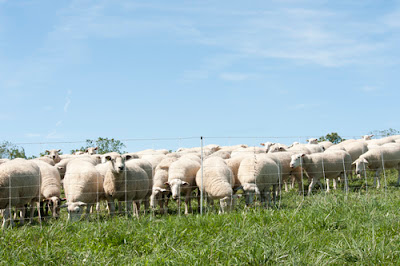 (photo) Strip grazing on the North Farm. Using ElectroNet to subdivide a large pasture so the flock makes efficient use of all the grass available.

We're also getting a few of our feeder lambs ready for sale. We'll be weighing them to determine which lambs are finished. We will also be taking notes as to which ear tags are in the lambs ears. When the lambs were born, we put in tags denoting their sire types (Hamp, Suffolk, Siremax or home raised). This will tell us which sires produced the heaviest lambs. 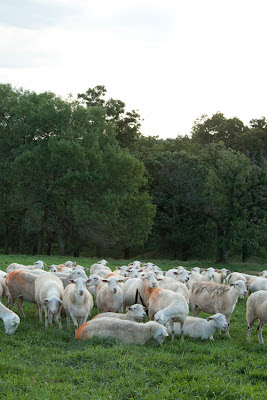 (photo) After one week, the sheep were brought in and the tags of bred ewes were read and documented. The crayons on the harnesses were switched from orange to green. Harness were readjusted as they tend to loosen during the first day or two of use.

It's catalog season! We've spent the last few months preparing our Equipment catalog. You should see it in your mailbox around the 3rd week of October. If you're not on our catalog request list, sign up here. It has many new items including drenchers, ear tags, scales, a sling for weighing ewes and even a new crook! 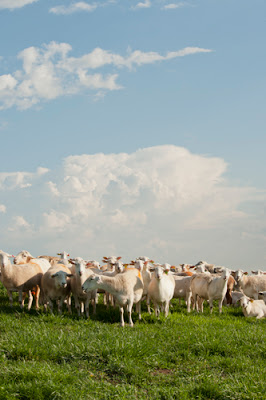 Hope the starting months of Fall are treating you and your flocks well.
-Premier