Bright and early Monday morning Mike popped his head (just his head, his boots were a little on the muddy side) into graphics and asked if someone could help him put bales in the feeders at the East farm. Though it was a cold morning, I volunteered to go and get some fresh air.

While Mike used the loader of the tractor to move silage bales, I cut the plastic wrap and bindings on the bales. A small pile of the silage hay started to form where I cut the bale, and the more impatient (or hungrier) animals decided they would go ahead and eat from this rather than wait for a full bale to be placed before them. The pile was forming just outside the door of the sheep pen, so between each cutting of the bale, I had to "shoo" the sheep away to keep them from going on the lam! 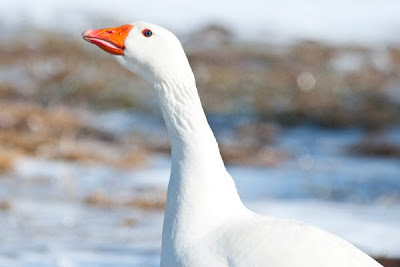 Photo: Even though he doesn't look intimidating, this Embden earns his keep by "patrolling" the East Farm.

This was NOT an easy task. It was a cold morning, so I was wearing my insulated bib overalls, winter coat, and heavy boots. Thus, "chasing" sheep was not performed at anything resembling a run, but more of an awkward waddle. And the geese that live on the farm weren't helping. The two Toulouse and the Embden are convinced that they perform guard duties around here. They're always patrolling the perimeter of the sheep pen, making sure nothing bothers their wards. I quickly learned that keeping the sheep from bolting out the door qualifies as an objectionable form of bothering because the geese came right at me, necks outstretched and low to the ground, beaks open to grab a fleshy bit of skin to bite and twist. 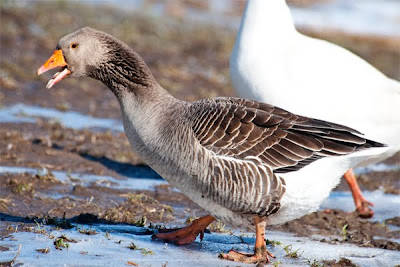 Photo: What I'm calling the Toulouse has also been called the Commercial Gray. Exhibition quality birds typically have a "dewlap" which resembles a double chin.

Luckily their protruding bellies dragging on the ground gave them a waddle slower even than my own, providing me with ample time to gather my nerves and simply step out of their way. With their plans foiled, they would retreat in order to regroup and plan their next attack. This little dance occurred between each bale we put into the barn (about eight total), and all the while Mike was safe in the cab of the tractor, enjoying the show that was going on below him.
Posted by Joe at 9:32 AM