We recently sold a few ewe lambs but before they could leave the farm, they needed their USDA scrapie tags. Carl was away at the American Sheep Industry meeting so Mike enlisted my help in placing the tags.

Ideally we would have used the North Farms handling system but various components had been drafted here and there when the barn's feeding layout was rearranged. It just so happens the panels that make up the chute are excellent gates. Mike and I were able to piece together a small, though functional, handling system. After all, a small handling setup is better than no handling setup. 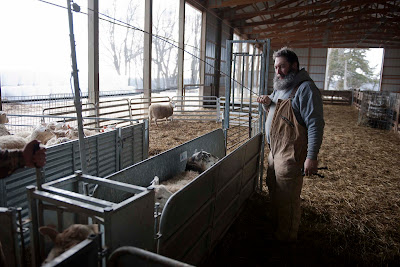 A few times when refilling the chute, the sheep balked at the entrance and refused to go into the chute. Eventually Mike and I were able to coerce the sheep into the chute but not without a few hiccups. This only occurred when the forcing pen was low on sheep. When this occurred we would fill the pen with more sheep. 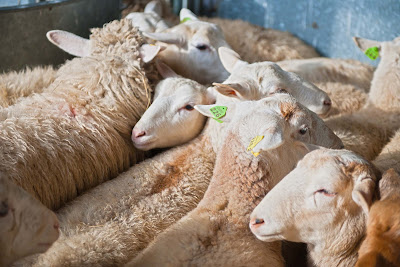 Photo: The ewes in the forcing pen waiting to go through the chute.

Eventually the last of the sheep were in the forcing pen. Luckily I saw a crook hanging on a nearby panel and grabbed it. The sheep now knew that I was serious about moving them through the system and they cooperated much more readily than before. I mentioned to Mike that all it took for the sheep to recognize my legitimacy as a shepherd was a shepherd's crook. He humored me by agreeing and went back to placing ear tags in the tagger. I wish I had grabbed the crook earlier, it saved a lot of time. 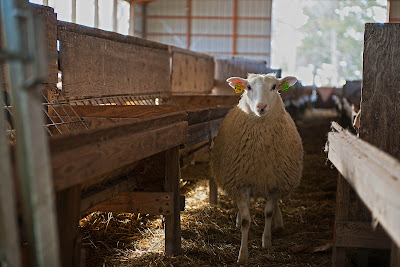 Photo: The ewe who decided to leave her pen and find the alleyway. We carry buckets of feed down this alleyway and drop feed into the bunks as we walk along.

Once the sheep were tagged we had to bring them back to their original feeding pens. Of course sheep being sheep, one decided to go over one of the feeders rather than around where all the others went. We were able to get her back to her pen without any issue after that. 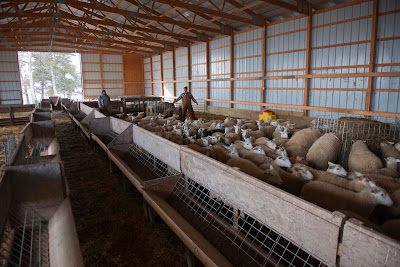 Photo: Mike and Joe moving sheep from pen to pen. Notice the ewes catching a quick bite from a big bale feeder (far right) while everyone else is walking by the drive by feeders. 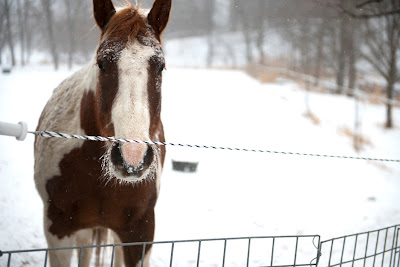 Winter has finally caught up with southeastern Iowa. We received 4+ inches after experiencing a week or two of 40°+ weather. Compared to folks in other parts of the country we've been lucky. 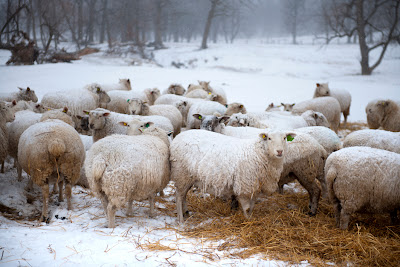 Photo: The ewe flock from the home farm. They are a Border Leicester/Ile de France mix. They were bred to several wooled sires (Suffolk, Hampshire and Ile de France). The Ile de France  sires are used to provide replacement ewes.

How are the flocks handling the weather? The wooled ewes on the home farm still have a heavy layer of fleece on them. They will be losing this a few weeks before their lambing dates in March. The lack of fleece keeps the ewes cooler during the lambing process. They're currently outside munching on baleage and have available shelter, though they tend to stay outside in the snow. 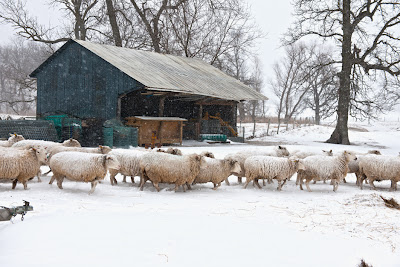 Photo: The barn in the background houses some of our spare woven wire and panels leftover from fence building and general farm products. The wooden feeder under the barn was used for feeding soy hulls to our ewe lambs during gestation this last year. I believe we plan to do so again this year.

The hair ewes at the North and East Farms are indoors and out of the elements. They have a heavy layer of bedding beneath them and the barn is well ventilated to keep them dry. They were bred in mid-late December for lambing in May. Since they are hair sheep and lack a thick coat of wool, they do not need to be shorn before lambing. 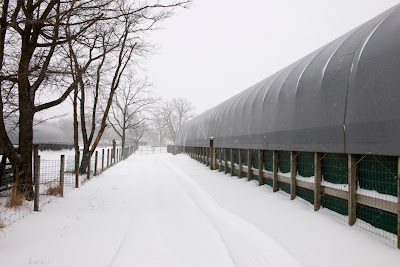 Photo: Our lambing barn sits ready for the upcoming lambing season. During winter the goats and the rams spend their time out of the elements in this barn. This laneway is often used for gathering the flock before they are sent through the handling yard which is at the far end of the barn.
Posted by Joe at 3:47 PM