Wrestling with a rambunctious ram to put on a harness is not the easiest of jobs but ensuring the harness is properly fitted can help avoid situations like the one below. 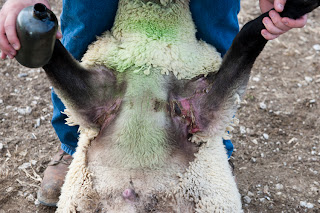 When using a marking harness make sure it is correctly fitted to the ram. An improperly fitted harness can cause chafing of the under arm area of rams who have little wool cover in this location. The friction between the strap and the animal can rub the skin raw. In the photo above the harness became loose, allowing the straps to rub on the animal.

Rams typically lose weight during the breeding season. The combination of exercise and lack of food consumption (they have other things on their mind) reduces the ram's girth causing the straps to loosen.  Harnesses can also loosen over time as the straps work their way into the wool.

Check a harness for proper fit during the season. This can be done when crayons are changed or when the flock is brought in to document new crayon marks. The harness should be tight to the rams body and exhibit minimal movement. Don't forget that the crayon also needs to be positioned between the legs.


(Note: The ram in the above photo was treated with topical applications of Iodine and Pinetar.)
Posted by Joe at 3:13 PM

Last week we started Wednesday morning a little earlier than usual. Mike and Carl needed help sorting sheep for the local auction. So Tharren and I arrived at work earlier than usual to help out the fellas. Tharren brought the camera along and was able so shoot a few photos. 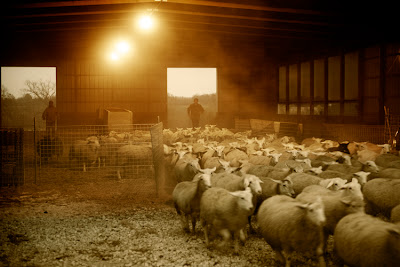 Photo: Carl (left) and Joe (right) bringing the sheep from the barn to the handling yard. 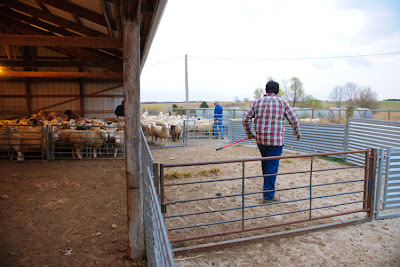 Photo: Mike and Carl work on pushing the sheep into a handling pen. I had to turn around and open the pen behind me in order to fit all the sheep. 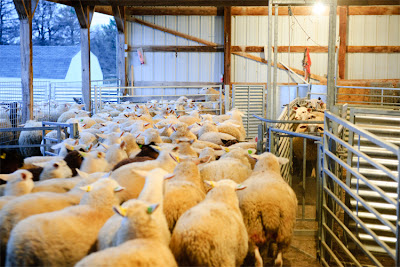 Photo: We're about ready to start sorting. We needed to push the last sheep into the last holding pen and then we were ready. You may see in the background a prolapse harness hanging on the wall. We keep one on hand just in case we need it during lambing season. 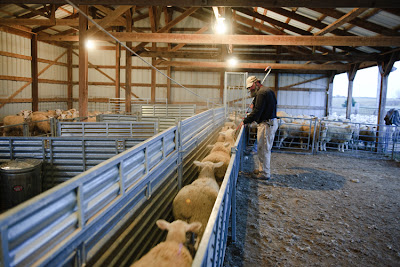 Photo: Mike putting his "shepherd's eye" to work. The pens on the left side of the handling system were our shear pens this spring. We would run the ewes through the handling system into each of these pens (there are doors between each pen for easy filling).

When the sort was complete Mike and Carl hauled the sheep away while Tharren and I returned to the offices to grace the graphics department with "eau de sheep".
Posted by Joe at 1:57 PM 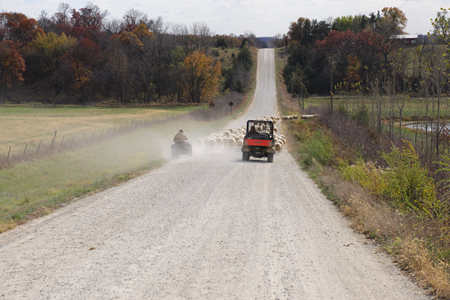 Photo: Mike and Carl took the flock down the road again. This time from the North Farm to the Home Farm. The total distance was about a mile. I was stuck back at the home farm with a ATV with a flat tire. I patched it and filled it with air in time to catch the guys closing the gate to the new pasture.

It's that time of year at Premier. The rams have been brought out of storage and have been put to work in the pastures. On Monday Mike and I put a marking harness on each of the two Hampshire rams Premier acquired earlier this year. 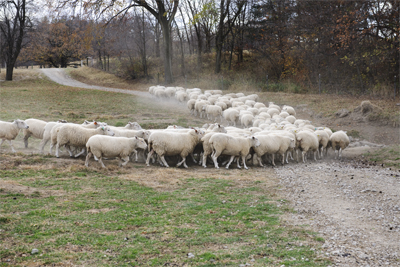 Photo: The wooled ewes taking a walk to their new pasture. Within a few days we sent the rams in with them to start the breeding season. Photo: We scratched the crayon with the pin before inserting it into the harness. The mark identifies where the pin holes are on the crayon. This allows us to quickly line up the holes and insert the pin. 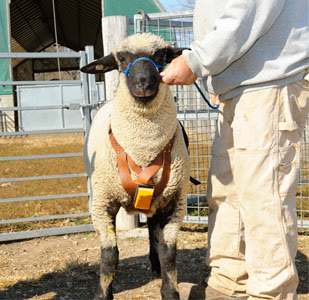 Photo: Mike using a braided rope halter to pose the ram for a photo. The marking crayon in the cross your heart harness is a little high on the rams chest. It should sit between the legs. The correct position allows for optimal marking when the ram dismounts the ewe.

Once the harnesses were on and the marking crayons inserted we took the rams out to the pasture. I noticed that the crayons were a little high on the rams chest and questioned myself on the effectiveness of crayons in a higher than recommended position. We waited a few minutes to see if the crayons would leave marks and they did. I would have preferred to re-adjust the harness in the field but it would be a little difficult to catch the rams in the open pasture. However, we will be bringing the flock in this week to ear tag the ewes and document which ones have been marked. While the flock is in the handling yards, we will re-adjust the harness so they would fit properly. Photo: The rams on their way out to the pasture. They will be with 125 ewes for a few weeks. We plan to switch rams after a few weeks. But the first lambs dropped will be from these fellas.

The ear tags we insert will be used to help make our lambing season less stressful. How? We will write down the tag number of each ewe and also the time frame she was expected to have been bred in. The ewes will be brought in shortly before they're due to lamb and we'll sort off the "soons" so they can be brought into the lambing jugs. 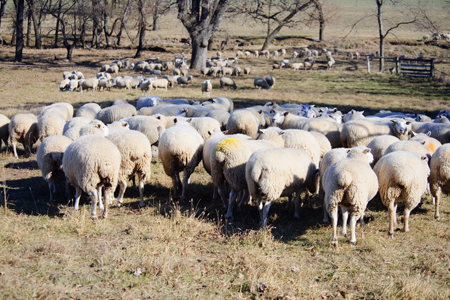 Photo: It didn't take long for the rams to mark some of the ewes. I was happy that the high crayon placement still left a mark on the ewe. 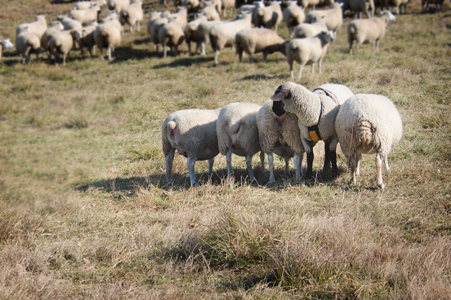 Photo: This ram is wearing the nylon harness. The yellow crayon he is wearing marked the ewes very well. We will switch crayon colors during the season to signify different breeding times/different sires.

Ideally we would have put the harnesses on the rams a day or two before we sent them out to the ewes. This would have allowed the rams to get used to wearing the harness and allowed us to properly adjust it. Harnesses typically only need one adjustment after the initial installation.