Purchasing Assistant
Position Summary: We buy product from all over the world. Our purchasing manager is retiring in 2 years. Will assist him to organize orders and delivery.
Requirements: Proficiency in Excel, Word. Operate forklifts.
Work Experience: Prior experience in purchasing.

To apply: send resume by email to bmcartor@premier1supplies.com.

Goings on, happenings, catalogs and a lamb named Houdini.

Stan will be providing a lambing update in our Feb/March Newsletter. Make sure to sign up if you're not currently receiving our newsletters.

I myself have not been outside much this winter/lambing season. The weather (though mild) has been too cold and the coffee perfectly warm and comforting. In truth, the reason for my lack of polar expeditions was catalog season—non-stop since last fall. The result of my tireless efforts (with assistance from Stan, Jody, Kerrie, Rachel and others) are the Poultry, Equipment and upcoming Fence catalogs.

For those of you eagerly awaiting the arrival of the fence catalog, you may start camping by your mailbox around the 3rd week of March. Until then, the website, blog, Guide to All Things Sheep and newsletter should suffice as your source of info from Premier.

Though I've been inside, I have heard a few tails tales from the lambing barn.

The most notable occurred one morning when one of our shepherds (who shall remain nameless) burst into Graphics and thrilled us with the account of The Phantom Lamb.

While doing chores in the pre-lambing area (where the ewes are kept prior to being put into jugs for lambing) the shepherd heard a faint baa. A quick scan of the pen offered no insights to where the young voice had originated. More baas, but no lamb in sight. Frustrated and ready to move on with chores, our shepherd was moments away from dropping to his hands and knees to check under each ewe for the invisible lamb.

Another baa lead him to a baleage bale situated in one of our bale feeders. A ewe making motherly ewe sounds (you know, the deep throaty grumble that ewes make when speaking to their lambs) was inspecting the bale. Knowing that the ewe did not believe the bale to be her lamb, our hero checked the bale up/down and all around for a lamb trapped against a panel. No lamb.

Another lamb like bleat emanated from the bale. The ewe circled and searched the bale ring. Again, no lamb.

Our shepherd, stopped and pondered all the possibilities surrounding the situation. Could the lamb running around the bale in order to avoid the shepherd and the ewe? Is the lamb hiding elsewhere? Are gases from the silage process escaping the bale and making baaing sounds?

During this thought process, our hero noticed movement from one of the holes in the bale. The loose baleage moved! Had years of raising sheep using non-organic methods caused a mutation in the forage or did a lamb decide to play a drawn out game of hide and seek?

Quickly, the shepherd reached into the bale and below the loose baleage. After finding his target situating his hands in just the right position, he pulled and the lamb (head first with its legs under the chin) came out! Once our hero released the lamb, the lamb bounded straight to its mother for a belly full of milk. The shepherd, having just assisted a bale in giving birth, walked away to continue doing his morning chores and hoping for no more errant lambs.

Upon the ending of the tale, the Graphics folks were doubled over in laughter and I was preparing my next blog post. Names were removed to protect the dignity of the shepherd and all embellishments were added by myself, writers privilege.

We recently added a few how-to videos to our Facebook and YouTube pages. Most of the videos pertain to lambing season and could be helpful. Check them out if you have time this weekend.
Posted by Joe at 3:50 PM 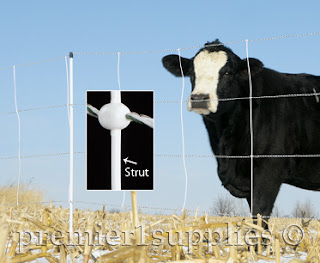 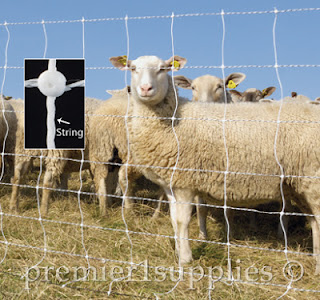 What do we recommend?

For most fences we recommend a strutted net. However, PermaNet, PoultryNet and VersaNet are only available as string nets. Both PermaNet and PoultryNet have thicker posts than regular string netting. The added strength considerably reduces sagging. VersaNet is a much shorter net (less weight) so sagging is not as severe as taller nets. Added posts and "Plus" nets further reduce sagging.
For short fences with low weed contact, string nets are sufficient. If set up well (adequate tension), string nets (E'Net and E'Stop) do very well, it takes a little more effort. 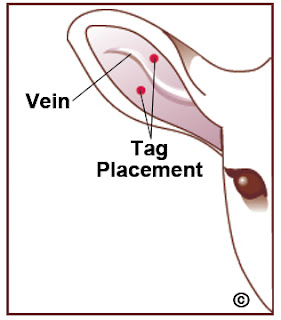 For maximum retention and the lowest risk of bleeding and infection, place ear tags in either of the two spots. (One piece loop tags only fit in the lower spot.) The goal is about 2" from the head of the sheep.

The opposite extreme (installing too far from the skull) will result in more lost tags as the tissue on the tip of the ear is tender and tears easily.

Be careful to avoid the large vein (shown above).

Be aware of the season time of year. In warmer months, tags should be treated with an anti-septic and a fly repellant (such as Catron IV or Pine Tar). We prefer Catron IV as it is long lasting, very effective and does not stain the tag.

For How-To videos for each type of sheep tag, Premier has a series of videos available on our homepage.

Tag selection:
This year we are inserting Q-Flex 1.5 tags into our lambs. They're a larger than Snapp or Swivel tags but smaller than most of our EasyTags. For lambs we prefer smaller tags (less likely to weigh down their young ears). For stock that we keep back, we insert larger tags such as the Q-Flex 3 or 5. Their ears can handle the larger tag and the numbers (printer larger) are far easier to read.

In our catalogs and on the website, tag colors are arranged by readability of the imprinting.

When cutting out old tags (when you switch from small to large tags), a pair of hoof trimmers easily trump a jack knife. The old hole can be reused for the new tag.
Posted by Joe at 10:45 AM

Late last Fall while walking out to do chores in the evening I would hear some of the strangest sounds emanating from my garden. Grunts, whoofs, chomps, slurps and snorts traveled through the night air and to my ears. Normally this combination of sounds would cause me to quiver in fear, but knowing the source(s) calmed my nerves.

The mysterious source? A trio of hampshire cross hogs.

My family and I fenced off a section of one of our gardens and let some pigs work their magic. The pigs would root around in the soil feasting on the remnants of the garden, turn over the soil and breakdown the still standing vegetation. The one thing they did not eat was the beets, instead they rolled these under the fence and out of the garden. Apparently these porkers did not read the part of the book stating that pigs eat beets. Can't say I disagree with them (sorry beet lovers).


Their house was framed with panels, covered with a tarp and insulated with straw bales on the outside. The original fence was reclaimed woven wire and cattle/hog panels. This setup is not very portable but it does keep the pigs in (rather than across the road visiting the neighbors).

In order to expand the pigs' roaming area without adding more panels, we used Pig QuikFence. First the pigs had to be trained to the fence. I set up the netting inside the panel enclosure and electrified the netting. I monitored the pigs until each one "experienced" the net. After this, I took the net down, barricaded the pigs in their straw hut and took down the panels. Up went the netting and out came the pigs. They stayed away from the netting and quickly took advantage of their new running area. The woofed, waddled, tilled and trotted to their hearts content.

After several weeks in their pen it became evident that the pigs were giving the fence a cautionary berth. This was easily determined by noticing that the earth was tilled up to 1 ft of the fence.

In a few months time, these pigs will make a trip to a local locker and become a plethora of delectable cuts and sausages.

As always, make sure to clean any food items produced in gardens/orchards that have had livestock or livestock manure present.
Posted by Joe at 3:59 PM