Yesterday afternoon I went to the East Farm to see what was happening over there—you never know when photo opportunities will present themselves. I saw a few ewes standing in a small grove of trees, which I thought was odd as it was not particularly hot that afternoon, and the rest of the flock was happily grazing on a nearby hillside. I approached the grove of trees and quickly found what all the fuss was about—lambs! Born a week early, our pasture lambing had begun quite unexpectedly. The lambs, all singles, looked to be in good health. As a new mother myself, I was quite touched watching these ewes care for their newborns--shielding them from the elements while keeping a close eye on me. They softly grunted to their little lambs while the rest of the world carried on around them. 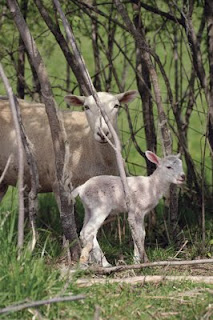 Posted by Cheyenne Miller at 7:56 AM

Premier welcomed spring with 65 day-old peeps. Jean (co-owner of Premier) and I picked up the little birds from the post office, where the employees were only too happy to hand over the noisy box of chirping chicks. The incessant chirps were a good sign, indicating that the chicks where healthy and energetic, and indeed they were. We ordered them from an Iowa hatchery, which ships the birds via the U.S. postal service. This brought back childhood memories, as I recalled my dad picking up several hundred Leghorn chicks from the post office each year.
Our current flock of brown-egg layers is now two years old, and this summer they'll be moving to their new range -- a pond pasture behind the Premier offices. Most of the poultry photos on Premier's website and in the catalogs are of this flock.
Premier's new flock is a colorful group. The chicks don't know it, but it's their job to test a bunch of new poultry feeders, waterers, etc. and look their best for in-use product and netting photos. Accordingly, we ordered a variety of birds so we could test a wider variety of products for both free-range and backyard use. 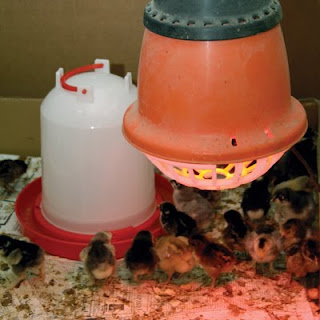 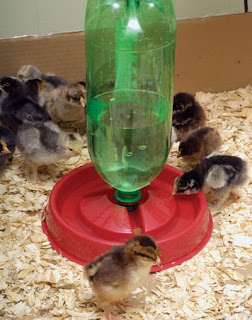 On the list:
1) Brown-egg layers. We've been especially pleased with the Laced Wyandottes and Brahmas, so we ordered more of them, along with several each of Speckled Sussex, Partridge Rocks and Cuckoo Marans. (Another reason we like these chickens -- we enjoy the fresh eggs!)
2) Cochins. These are new for Premier, but popular among our backyard poultry customers. We selected Blue, Black, White and Silver-Laced.
3) Bantams. Incredible -- these wee birds make standard-size chicks look jumbo-sized! We have 24 of these, two or three of each: Frizzle Cochins, Golden Laced, Mottled and Barred Cochins, Black Silkies, Dark Brahmas, Mille Fleur, Golden Sebright, Japanese and the amazing White Crested Black Polish (these were the only ones we could immediately identify with certainty -- because they have what looks like little pom-poms on top their heads, even as day-old chicks). 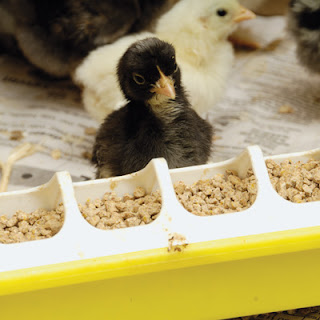 It's proving to be an interesting little flock. Problem is -- as downy little chicks, they all look alike! We're slowly figuring out which is which as they grow their new feathers and begin to show their colors.
–Vivian Rothe
Posted by Jody Seeley at 9:13 AM