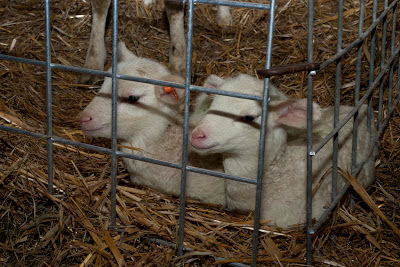 What's the most important thing that lambs need for a healthy start?

Colostrum, colostrum, colostrum! It is the first milk produced by mothers. It contains high levels of energy and nutrients that are vital for a newborn's health and performance. Also, the ewe's antibodies (not antibiotics) are passed on to the lamb through the colostrum. These antibodies act against infectious agents. Watery mouth (a common lamb illness) can often be avoided if a lamb receives enough colostrum as a newborn.

When the farm guys (Mike, Carl and Adrian) come across new lambs in the lambing barn, they make sure that the lambs receive colostrum from their dam and that the ewes teats are stripped (milked by hand to remove any wax build-up in the teat canal).

If a ewe has no or too little colostrum, it is supplemented with colostrum from another ewe, cow, goat or a colostrum alternative such as Lamb & Kid Kolostral. This colostrum is tubed into or fed via bottle (depending on lambs ability to suck).

What else does colostrum provide aside from passive resistance to disease early on? Ever wonder why a lamb seems to fall behind the others in terms of growth? If you look back at its history, it may not have received enough colostrum. It provides the boost a lamb needs for a healthy start. Over the years we've noticed the lambs that didn't receive enough colostrum usually became the runts or ne'er-do-wells.


Any other newborn lamb protocols from Premier?

While the lambs are still young, we dip their navels in Triodine using a Navel Cup. This dries out the umbilical cord and aids in preventing navel joint ill.

We match lambs to ewes—no, not by color—by dam and lamb(s). The ewes are numbered by order of lambing. Their lamb(s) receives the same number as the ewe. Numbers are made with Super Sprayline but Si-Ro-Mark can be used as well. We also use a color scheme to denote twins, triplets and singles. Single receive blue marks, twins/green and triplets/orange.

Many folks give lambs select vaccinations. We suggest that you consult your veterinarian and local producers to see what vaccine protocol is suggested for your management system.

Update February 20, 2013—All the seats have been filled. If you would like to be put on the waiting list, email Cheyenne at cmiller@premier1supplies.com. 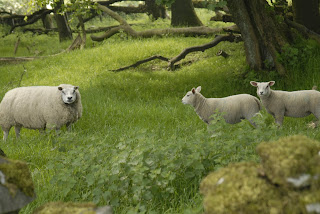 This July 17-27, journey through unique, historic, and beautiful England and Wales with 35 other USA sheep producers. The trip includes:

Royal Welsh Show
A full day will be spent at the Royal Welsh Show—one of the largest and best-attended agricultural shows in Europe. Located in the heart of the beautiful Welsh countryside, the Show features an impressive display of pedigree and commercial livestock, farming practices and ancillary industries of Wales.

Other stops and highlights

The weather of late has been hovering around a balmy 0°F in the morning to a sweltering 15°F in the afternoon. And lambing season is starting for us (funny how cold weather and lambing seem to coincide).

This year our experiment is using a former warehouse as a lambing barn. This new "barn" offers protection from the elements as well as the option of heat (a real treat). There are some kinks that need to be worked out: feeding, watering and ventilation.

For feeding, the farm guys have been busy building single-sided feeders (using our plans and panels of course). They're arranged to form an alleyway, which allows someone to walk down the center and drop feed to the ewes w/o the need to get into the pen (which is nice since many are carrying twins or triplets.

Our normal lambing barn (which will still be used this year) has a PVC pipe that carries water the length of the lambing barn. The pipe has cut-outs (so the animals can drink) and flows continuously (so risk of freezing is reduced). A pipe will be installed in the "new" barn. Until then, ewes will be watered via buckets. Fortunately, there is a water hydrant and hose in the building so the guys won't have to haul individual buckets. The farm guys are experimenting with placing a water bucket (held in place with clips) in the feeder and at an angle. They're also trying different sizes and shapes (square vs round) to determine the optimal bucket for this setup.

There are some ventilation issues to work out—the building was not originally designed as a barn. Keeping livestock in the building will bring in considerable moisture. We'll have to be vigilant about clean bedding and getting clean air into the barn. We're planning on installing a vent pipe, it's just a matter of what size and where.

Before you build a fence… 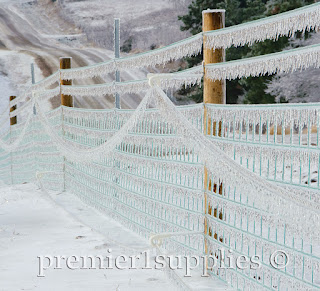 For some folks it’s winter which means when they’re not enjoying chores in the icy wind, they’re inside by the fire thinking about their dream fence. But before they build, they need to take into account the following:

2.  What is the fence’s location?
Is it flat? Or does it go over hills and ditches as well as around curves? Is it covered with brush, trees or open grass? Are the soils rocky, very soft, sandy or firm? The optimum fence design often hinges on the answers to these questions. 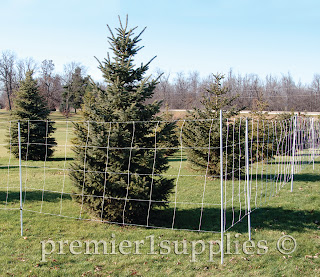 Depending on the shape of the area to be fenced, extra posts will be needed at corners, curves and major directional changes.

3. Is it a lane or corral fence?
These situations often force animals into contact with fences. Such fences need better visibility, high strength and if possible, no hot wires.

4. Do the animals know the fence? 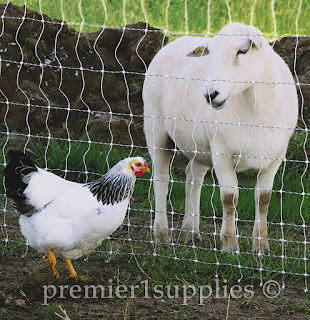 Do not keep animals of the same species on opposite sides of the fence. They will try to join their companions. Animals of different species (above) is perfectly acceptable.

5. What specific animals need to be fenced in or out?—Always design and build the fence for the most difficult species. Some rules of thumb:
6. Should you energize the fence? It usually pays to do this. Why?
7. How keen will animals be to breach the fence line? Build for the worst case situation you can afford to do so. Situations below:
8. How visible should a fence be?
It depends. Horses, deer and antelope move at high speed and have restricted color perception (compared to humans). They may not see small fence wires such as HT wire, MaxiShock or some polywires. So the may charge right into them.
That's why it's wise to include rope or tape (both highly visible) in certain fences. 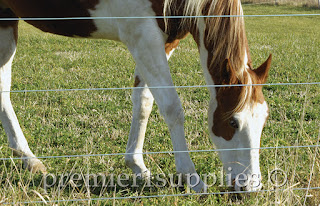 HT fences (such as the one above) are not easily visible to horses and are thus unsafe!

9. Are long dry periods common?
Electric fences typically rely upon soil moisture as a conductor. When the soil is dry or covered in dry snow, normal electric fences and low impedance energizers may not work.
Solutions for this are:
Consult Premier if you have any questions regarding dry soil fencing. 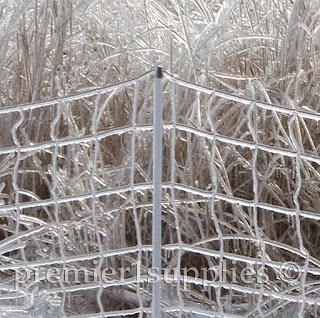 Netting weighed down by freezing rain.

10. Will heavy snow or ice occur?
Enough ice can bring down the strongest power lines, so all fences are vulnerable. But some cope better than others. Are your animals likely to penetrate the fence before the ice melts.

11. What is the cost if the fence fails?
The high the potential cost (in time, money) of a failure, the more reliable the fence design should be. Examples:
To help determine the right fence for you, consult a Premier Fence Catalog (or request one) or talk to Premier directly. Our email is info@premier1supplies.com and our phone # is 1-800-282-6631.
Posted by Joe at 2:22 PM