Last week I took a quick walk on the North Farm to open up a PermaNet electrified netting fence to let the sheep travel between pastures. As I was walking the fence line I saw the following: 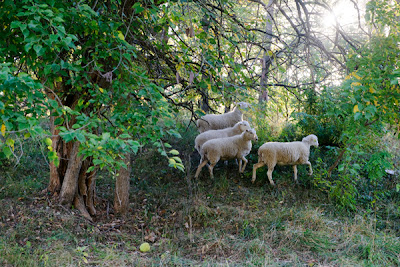 A closer view would show you this: 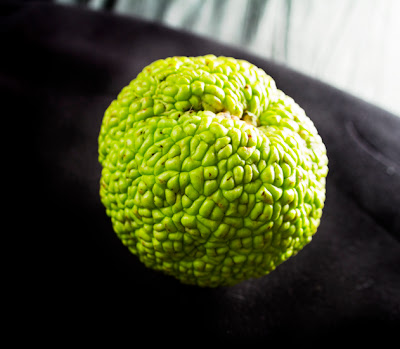 What you're looking at is a "hedge ball" from an Osage Orange tree. The Osage Orange is also known as Hedge, Bodark or Horse apple. The trees were commonly used for fence posts or as an actual "hedge".  The hedges acted as fences and the thorns on the trees deterred cattle from passing through. Barbed wire would eventually come onto the scene to replace hedge as the thorny deterrent. The orange/yellow wood makes excellent bows and is immensely strong.

The fruit has been used to deter spiders, cockroaches, boxelder bugs and other insects. As I write this there is a hedge ball sitting on my desk—I have yet to have any insect issues! 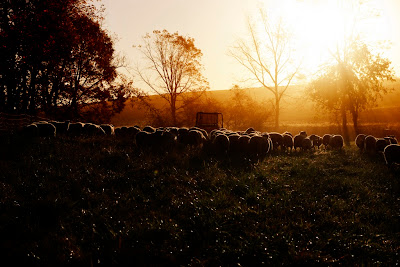 This week we moved a flock of ewe lambs between pastures at the North Farm. Premier photographer, Tharren, was able to shoot a few photos while the ewes walked through the dew covered grass during the early morning. A few of the ewes are marked with Red Super Sprayline. These ewes were with the wethers acquiring a few more groceries before we put them onto pasture. 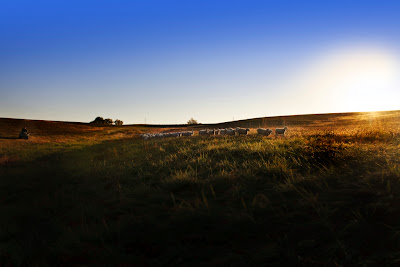 The flock in the above photo is walking along an ElectroNet electrified netting fence. We used it to divide a clover field from a grass based pasture. In a few months we will put the rams in with these ewes for spring lambing.
Posted by Joe at 2:49 PM