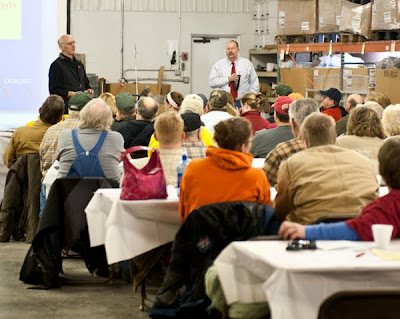 Winter Sheep Day was a success! The 120 attendees were from Iowa, Illinois, Missouri, Indiana, Ohio, Minnesota, Wisconsin, Michigan, South Dakota and California.
Speakers were Dan Morrical from Iowa State University, Byron Leu from ISU Extension Services, Stan and Jean Potratz of Premier and Rob Rule and Greg Ahart from Superior Farms. Greg flew in from California to encourage everyone to raise more sheep.
Stan started the day by discussing the origins of Premier and how it has changed throughout the years. He focused on how management of Premier’s sheep and land has changed. Premier is experimenting with an expanding hair sheep flock while maintaining a wool flock on our home farm. 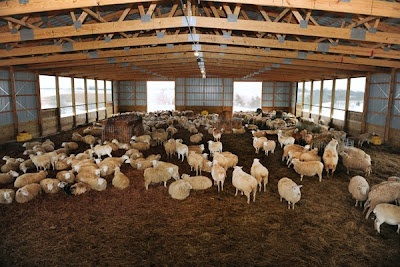 Photo: Our ewe flock at the East Farm. They are mostly of wool/hair genetics. This year they were bred to dorper/romanov rams.
Greg Ahart and Rob Rule both work for Superior Farms—the largest lamb processor in the United States. They discussed the current lamb market (it's great if you have lambs to sell), how Superior is now adapting to that market and what types of lambs do the best in their markets.
Dan Morrical discussed alternatives to feeding corn. He enlightened us with his experiences with distillers grain's and soybean hulls. He also discussed mineral mixtures and supplements and the need to keep an eye on your animals' nutrition. 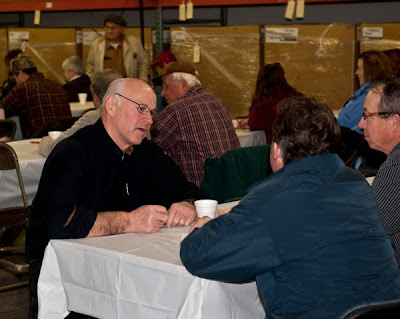 We paused for lunch, Stan then spoke about Premier’s year one experience with filling their own bellies with baleage (hay silage in bale form) for sheep. He detailed on the process of making baleage, storing and nutrition analysis.
Byron Leu provided an analysis of Southeast Iowa's hay crop for 2010. Iowa State University's Extension Service enabled many hay producers to test their hay and other forages. 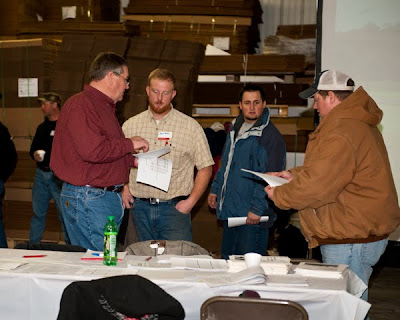 After the organized discussions, the group split into thirds, one left for the East Farm with Carl McCall to look at our hair sheep and the new barn there.

Others went with Mike Corderman and Dan Morrical to our experimental lambing barn in which the temperature is kept just above freezing. After the walk-through (attendees were required to wear disposable plastic boots for bio-security purposes) of the heated shed, the group went out to our sheep barn where ewes and lambs are kept. 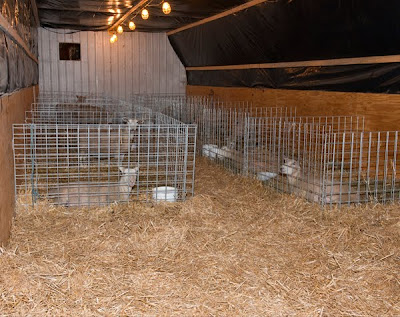 Photo: The inside of our heated lambing shed. Ewes were brought in right before lambing and left within two days after lambing. It's a little cozier than lambing outside.

Mike discussed the layout of the barn with those who were interested and Dan provided everyone with a list of "Lambing Time Tips" and demonstrated said tips on a few of the lambs. 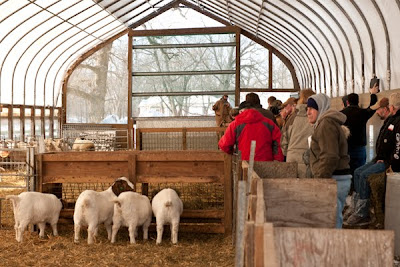 Photo: Mike Corderman (back of the barn) describing the barn and our lambing procedures.

Overall everyone walked away with an expanded knowledge of the sheep industry, lambing, nutrition and raising sheep in general.

Photos: This year's lamb crop from the home farm. Lambs were sired by an Ile de France buck. Though the blackface lamb in the right photo came from our "experimental" Suffolk buck.
Posted by Joe at 8:15 AM