Tips for setting up netting successfully

On occasion someone will call in or email and ask "my net is sagging, what can I do?" There are a few options for setting up netting and reducing sag, we'll go over them below. 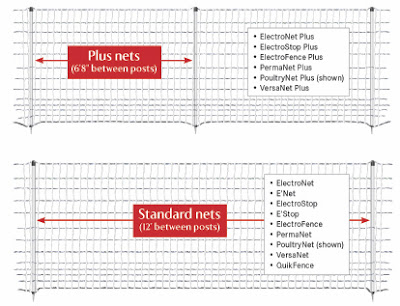 The first three options cover what you can do with net you already have. If you're planning on purchasing net, look into using a Plus net for areas with corners and curves.
Posted by Joe at 3:49 PM

Premier is looking for an Inventory Purchasing Assistant for acquiring product from all over the world via road, sea and airfreight. If qualified will advance to head of purchasing within 18 months. Requires good interpersonal, computer and spreadsheet skills. Contact dsutton@premier1supplies.com


Apply to bmcartor@premier1supplies.com
Posted by Joe at 3:36 PM

Southeast Iowa has been dry for the last few weeks. Last year we went over drought fencing tips. This year we thought we would go over energizer impedance.

Impedance is similar to resistance. For energizers it means the level of ohms (resistance) that matches an energizer’s peak output. If low ohms then it's a low-impedance energizer.

The first fence energizers (50+ years ago) were high-impedance units. Their maximum output occurred when the fence was weed-free. They could cope with drier soils but were very vulnerable to weed contact. Most were too small in output to be effective against difficult animals. The next generation was low-impedance energizers. They coped well with high weed contact but not with dry soils or poor conductors. They work best against low-resistance animals (cattle, horses, pigs) standing on moist soils.

The graph below compares 2 low-impedance units with a wide-impedance energizer (the 506). 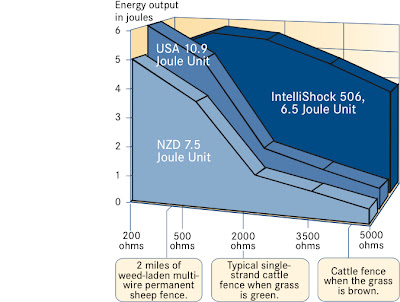 Joules of pulse energy at the end of the fence (and thus the potential pain available to animals) drop as the total resistance of the fence circuit increases—due to wet soils becoming dry, reliance upon stainless steel polywire and tape fences, or fencing across sandy/rocky soils. Low-impedance energizers deliver high pain potentials when the resistance is low (hence their well-deserved reputation for working well when the soil is moist and the grass is green), but much less as the combined resistance of the soil, animal and wire rises.
Posted by Joe at 9:29 AM