Baa Baa Black Sheep, Have You Any Wool? 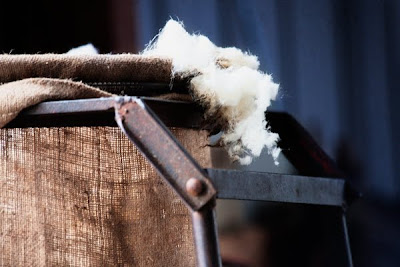 Disclaimer: I'll admit the title of this post does not match up with the topic of the sheep at the East Farm, but "Baa Baa White Faced Hair Crossed Sheep, Have You Any Wool?" does not have a ring to it.

Spring has sprung! At least it's attempting to. The crocuses are blooming and the tulips and daffodils are out of the ground. The pastures have shifted from the dull browns of winter to an increasingly lush green. We've even had our first 70 degree day followed by an evening thunderstorm (complete with hail for some of us). It is evident that mother nature is still making up it's mind because the following day was cold and blustery, a far cry from sunny and 70.

Other less obvious signs of Spring are appearing as well, our consultants have been busy with phone calls and emails answering questions about fencing and equipment. It seems a lot of people are in a fencing mood right now, I think they might have spring fever.

Tharren and I have helped by doing production work, which involves filling oil and SuperLube containers and putting together EZ Reel and Rope Gate kits. If you’ve received a 4 oz. bottle clipping oil with an offset label, I am proud to say that my oil covered hands placed it there.

Another major occurrence was the shearing of the wooled ewes (and a few rams) at the East Farm. Though we have mostly hair sheep genetics on this farm, we still have a few ewes that appear to be distantly related to the woolly mammoth, though in name only. 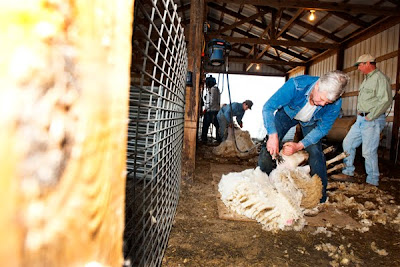 Photo: The contrast between the outside and the inside of the fleece was quite significant. It's amazing how much extra material the ewes manage to pick up.

A few shearers came out to take care of these ewes, one brought a baler along. A baler compresses wool into the wool bags to fit more wool per bag, this allowed them to haul fewer of the bulky bags home with them. We did use a ring stand (a ladder that holds the wool bag upright) for the lower quality wool in order to keep it separated from the better quality fiber.

Carl, Don and I wrangled the sheep for the shearers while Mike and Tharren bagged the wool and made sure the sheep left the barn from the correct exit. The process took about 5-6 hours and yielded about 8 hefty bags of wool. 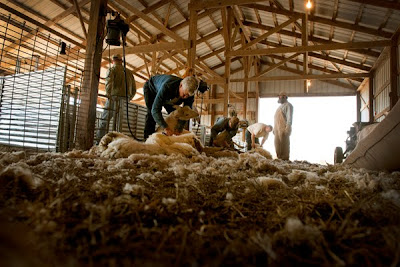 Photo: Tharren was able to achieve this angle by setting the camera on the ground. You can see part of the baler to the right of Mike (in my mind the baler was an invaluable piece of iron, Mike was pretty handy too).

What is next on the agenda for the sheep and the farms? We're looking into letting them out into the pastures to start grazing. During the past few months we’ve collected and composted the used bedding from the barns. We'll be spreading this nutrient rich concoction downwind of the Premier offices onto the pastures. I'll keep you updated on how that turns out. I’m sure we’ll start a few fencing projects within the next few weeks, after all, netting doesn’t quite install itself, but we're working on that. 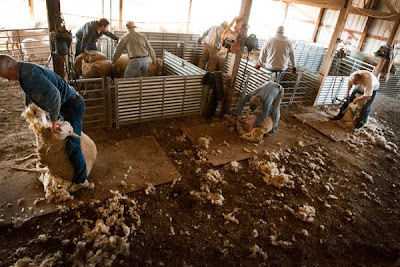 Photo: A view that has all of us in action. Notice the three pens. We would run the sheep through the handling equipment and into the left pen. The panels between the pens have doors that allowed us to easily fill each pen and keep the shearers busy.